When Catherine Reed opened her eponymous restaurant in Paris’s 7th arrondissement, she had clear ideas not only what she wanted to serve, and how the place would work, but clear ideas of what she didn’t want to do. Reed has been a hit since it opened to rave reviews from Paris’ difficult critics, and the small restaurant is full almost every night. 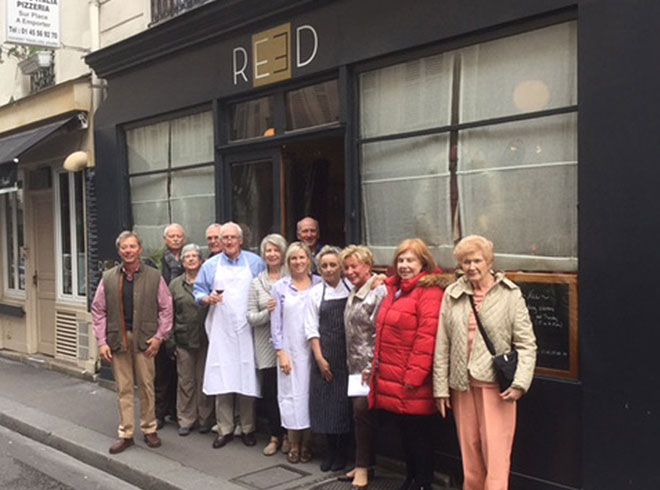 So we asked her, as an expert, with all the many thousands of cafés, bistros and restaurants in the City of Light, how does a tourist, or a local, know how to choose a place to dine? Or which to avoid?

Or which to avoid? She offered good and simple rules to follow, questions to ask yourself, etiquette:

1.  The menu should be commensurate to the size of the restaurant. If the menu is big but the restaurant is small, that’s a bad sign.

2.  Beware when the menu has photographs!

3.  See whether or not the restaurant is using seasonal ingredients. If you see asparagus in March, it should be fresh, but if you see it in October, likely frozen.

4. If you make a reservation, either show up (preferable) or at least call and cancel. Doing nothing when you can’t make it upsets all the key players and plans of the restaurant’s evening.

5. Leave a tip in cash, not on your credit card. The VAT ― the normal tax in Europe ― is added to the amount and lessens the waiter’s gain.

The Grand Tour offers an optional private cooking class with Catherine Reed on its tours to Paris.

Comfortable shoes are a must for walking, sometimes on ancient uneven streets, and exploring other destinations on foot. Particularly for spring and fall, light rainwear is advisable. Bring clothes that you can layer, so you are prepared for a wide range of temperatures. Daytime attire should be comfortable, but if you want to blend in a little more, probably skirts for women and/or long pants are preferable. Almost everywhere dress is casual, but both men and women should bring more dressy attire for the opera, concerts and evening dinners; a dark jacket is a must for men! Tennis shoes and blue jeans may mark you as a tourist for pickpockets if you are out on your own. Always remember — pickpockets are a fact of life in travel.

We recommend that you carry along a debit card to supplement your usual complement of credit cards on a trip. In our experience, exchange fees on a debit are about 1% lower than on credit cards. But more importantly, ATMs which are found all over Europe under different names (Bancomat is one) have virtually no lines and save you valuable time for sight-seeing, shopping or simply relaxing!

In the past several years, travelers in Europe have often been confronted with a “convenience” when paying the bill at restaurants: paying in dollars, rather than the local currency. We recommend that you decline this service. Let your bank make the exchange to dollars, not theirs! The rate will be significantly better.

Though many people like to convert to an international plan on their cell phones while traveling abroad, this is still an expensive proposition. Pre-paid calling cards may be purchased throughout Europe, particularly at tobacco shops and magazine kiosks. They allow you to make phone calls in Europe and to the US for a very low cost. They come in different denominations, starting at 5 Euro, and are easy to use. Rates vary as in the US. Instructions in English are usually included on the card.

When traveling it is often difficult to know what the norms are for tipping. How much to tip a waiter, a porter, a driver, a guide? On The Grand Tour we include all tips, except for hotel maids, so you don’t have to worry. But on your own, there are some general guidelines. In Europe, “rules” differ by country: in many countries such as France or Germany the service is often included, so rounding up for good service (37 Euros to 40 on a meal, for example) works well. In the UK, a 10% tip for waiters is standard but in an upscale restaurant tip 12–15%. In the Czech Republic tips are included by law. Rounding up also works for taxis, but in Italy there is no tip. A good private guide should receive about 10% over their fee. We recommend leaving 1E per day per person for hotel cleaning personnel daily on the pillow.